Eds – we are pleased to welcome back our library colleague and regular contributor to HeadLines, James Youle. His passion for art and architecture is reflected in the articles he writes for this ezine which, in turn, contain references to relevant material in our own library collections. In this issue James considers the contribution of architect, Richard Seifert, to the London skyline, and we were delighted to find a film clip of some of his buildings on the British Pathe Film Archive…

Colonel Richard Seifert (1910-2001) was the most successful, prolific and controversial architect of twentieth century Britain.

As head of Richard Seifert & Partners, no other architect since Christopher Wren has done more to change the face of London and the City of London. He even credited the Wren churches as an early architectural inspiration when he was a boy at the Central Foundation School in the City of London.

His buildings were at times modernist, brutalist, postmodernist and neo-vernacular, but at all times they were Forceful with a capital F. 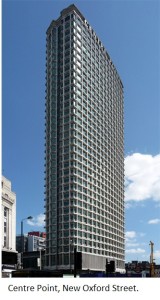 Richard Seifert estimated that he had designed over 1000 buildings; around 600 were in The City and in London and its environs. At the height of his fame in the 1960’s barely a day went by without a request to design a building, a torrent he was “bewildered” by.

I was christened in the Wren church of St Clement Danes, and I in turn have been inspired by the buildings of Richard Seifert. It was going to that church that I must have noticed my first Seifert building, Woolworth House (built circa 1955) on Marylebone Road. As a boy I attended Wembley Conference Centre (c1977) for the National Youth Orchestra, visited the NatWest Tower (c1971-80), and visited my grandmother at the Clementine Churchill Hospital (c1980) at Harrow-on-the-Hill. I visited his Royal Garden Hotel Kensington (c1965) and gazed up at his Drapers Gardens (c1967) and Kings Reach (c1972) towers from the Thames. 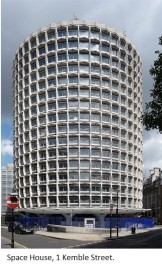 As an adult working at The British Museum I would have a drink at Centre Point (c1963-66) and buy my lunch in its shadow. On 07/07/2005 I was at his Euston Station (c1974-78) and after ‘power surges’ decided not to take a bus to Bloomsbury, but to walk instead. I was in the Round Reading Room when I heard a bus from Euston explode.

As this is a personal appreciation, I have listened to four hours of interviews he gave in 1996 to The British Library National Sound Archive (NSA), for their Architects Lives collection. He was one of ten children and in 1928 entered the Bartlett School of Architecture at UCL. He was not an academic student, and was distracted from study by playing rugby, chess and violin for the university. He later said that he was so successful as an architect due to his commercial mind and sociability. To be truly successful he said that an architect had to be a “creator, technologist, lawyer, cost controller, sociologist,
administrator, and conservationist” (NSA). 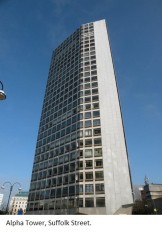 © Copyright Keith Edkins and licensed for reuse under this Creative Commons Licence.

In the 1930s as a junior architect he was earning only £3 per house for housing estates in suburbs like Dollis Hill; life was a struggle. The Second World War got in the way, but also presented new opportunities. He served during and after the war in the Royal Engineers and the Fourteenth Army, and left not only with the title ‘Colonel Seifert’ but also with “self-confidence” and a “sense of leadership and control”. After severe bombing in London, Seifert was well placed to begin changing the capital’s skyline. He would arrive at his office before 7am and work well into the evenings. Attired in a dark pin stripe suit, wearing spectacles and smoking a pipe, he toured construction sites in his Rolls Royce, even on a Saturday.

He was devoted to his wife Josephine, his children and his grandchildren. He lived in the same home in Mill Hill from 1946 until his death, demolishing neighbouring houses to create a three acre garden, and treasuring a 400
year old Mulberry tree. 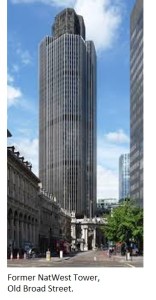 He called the NatWest Tower “the most important one of the lot”, and it is a building that greatly resembles him, with its sleek black glass and granite, and polished steel vertical ribs. This magnificent 600 foot tower was opened by The Queen in 1981; at the time it was the tallest cantilevered building in the world, and the tallest tower in the UK. At the opening, NatWest Chairman Robin Leigh-Pemberton said to Her Majesty that neither the bank nor Colonel Seifert had aspirations to reach Heaven.

Eds. We have information guides and a number of interesting works in our collections that provide more information about Seifert. 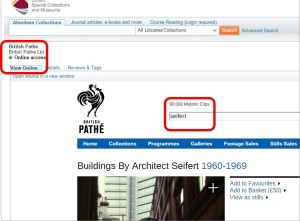 To find a clip of Seifert’s buildings on the Primo record for the British Pathé Film Archive, make sure the View Online tab is open and enter ‘Seifert’ in the search box. You will be provided with a link to the film clip.

A link to the British Pathe Film Archive can be found on Primo.

The British Pathe Film Archive offers previews of 3500 hours of news, sport, social history and entertainment from 1896 to 1978.

This site uses Akismet to reduce spam. Learn how your comment data is processed.