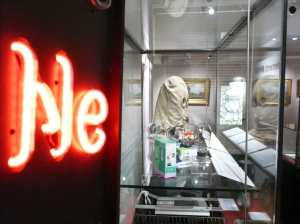 ‘Elements’ is the latest eclectic exhibition at King’s Museum – our newest (and bijou-est!) display space  at the centre of King’s campus. ‘Elements’ displays a remarkable selection of items from the university’s many museum collections, highlighting some of the ways people have explained, explored and exploited the properties of the earth’s components.

The displays represent a microcosm of our collections. Starting with the Aristotelian idea of Air, Fire, Water and Earth, a series of oil paintings annotated with poetry quotes illustrate something of the artistic expression of these four elements, with the addition of ‘aether’ – the mysterious material that medieval scholars believed made up the universe beyond the known world –  represented by one of the very ethereal-looking stained glass panels from the old Marischal College Library, called Divine Spirit Over Nebulous State.

Metallic artefacts, both precious and practical are on display too, and show how societies have been shaped by the weaponry and wealth that metals have influenced : tiny Zapotec masks made from gold from the days of Mexican conquest; a solid silver arrow; a  raw nugget of Platinum; iron spurs detailed with Bolivian silver; a prehistoric copper axe from around 1500 BC, a steel sword from a 19th century member the Gordon Highlands regiment, and more. 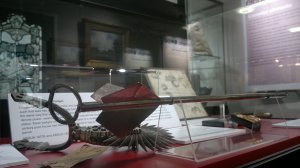 There’s also a selection of more recent chemical developments, with a fascinating focus on some of the more obscure (but no less interesting) elements of the Periodic Table, with Neon (and Xenon, and Krypton) lights, a disconcerting First World War gas mask, as well as a modern mobile phone containing Tantalum – the rare and lesser known metal  required in a host of modern appliances such as DVD players and computers, which is mined mainly in the Democratic Republic of Congo where conflicts relating to this  invaluable resource have raged in recent years.

The exhibition was launched on 26 September with an informal reception. Soraya Kasim, Curartorial Assistant (Community Engagement) deserves an honourable mention for her delicious and beautifully decorated ‘Elements’ cake, with Air, Earth, Fire and Water themed icing!

For a little culture in your lunch hour this place is perfect: no chance of museum fatigue here! Personally – much as I love to ramble for hours along the labyrinthine corridors of major museum sites – there inevitably comes a point when sore feet and saturated brain make it too much to take in. The bright side of a bite-sized space such as King’s Museum is that visitors can really absorb all the carefully considered details, and appreciate the thoughtful care with which the exhibitions are collated and curated (without rushing to get on to the next mile of display cases). The King’s museum is an amuse-bouche for the mind.  I always leave with my intellectual appetite whetted.

The Elements exhibition is open until January 2012.

This site uses Akismet to reduce spam. Learn how your comment data is processed.